So what other strategies show that biostimulants can make a difference?

The following article shares insight specifically on the role of biostimulants in enabling nitrogen reduction.

When soil N is readily available, plants tend to develop a smaller root to shoot ratio and a plant’s capacity to accumulate soil N will become more dependent upon physiological parameters (e.g. membrane transporters, assimilatory proteins, etc.) regulating N uptake rather than variation in root morphology. Plant biostimulants may promote nitrogen reduction and assimilation through modification and regulation of plant nitrogen metabolic pathways (Schiavon et al, 2008). For example, at both normal and low soil N levels, the application of biostimulant (in the form of protein hydrolysate – amino acids) improved the growth of greenhouse tomato (Sestilli et al., 2018). The better agronomic responses of protein hydrolysate treated tomato was attributed to an enhanced root function that facilitated N uptake and translocation. It was observed, at low soil N concentrations, protein hydrolysate application upregulated the expression of genes encoding for amino acid transporters and ferredoxin-glutamate synthases and glutamine synthetase in roots, which are known to be involved in N assimilation. 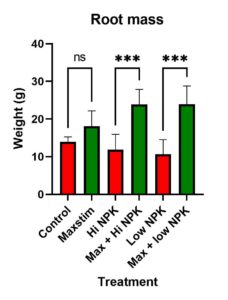 Root exudates: Root exudates can have an influence on plant nutrition, especially for micronutrients such as Fe. Root exudates may also be important for N capture in soils with low available N where a whole range of organic N sources must be accessed by plants (Chapin et al. 1993). Recently it has been shown roots can take up protein as a nitrogen source by exudation of proteolytic enzymes that digest exogenous protein at the root surface and intact protein can be taken up into the root cells, possibly via endocytosis.

Root metabolism: Even without changing root morphology, plants have the ability to increase N uptake using plasticity within the uptake mechanisms of the root system. For example, fertilizer placement studies in soil have shown that the proportion of the root system that needs to be exposed to NO3 – to meet plant demand can be very low (as low as 10% in some cases). The reason for this is the high capacity of the root system to transport NO3 – and the ability to change the capacity of the transport system in response to supply and demand (Drew & Saker 1975).

NO3- and NH4+ Transporters: NO3 – is often the predominant nitrogen source in an agricultural context, especially in the case of temperate grown spring/ summer cereals where soil conditions (temperature, aeration, neutral pH) favour microbial soil nitrification. Even though NH4 + under these conditions is often at a significantly lower relative concentration than NO3 – it is still an important N reserve that will have an influence on plant N homeostasis and NO3 – uptake. Plant reliance on balanced sources of N (NO3 – and NH4 +) is evident across many plant species and is most likely the normal approach plants use to meet their net N requirements over the course of their developmental growth period. Therefore, it is also important to consider the acquisition of NH4 + alongside that of NO3 – under all cropping conditions, particularly considering that even low concentrations of NH4 + can, in some cases, inhibit NO3 – uptake and that the effect of NH4 + on NO3 – uptake appears to vary, not just between crop species, but within species.

Regulation of N processes in the roots: Both NO3 – and NH4 + uptake are subject to internal plant regulation. After a period in the absence of NO3 -, the NO3 – capacity of the nitrate transport system (HATS) is reduced to its constitutive level (cHATS). Upon reintroduction of NO3 – the inducible HATS (iHATS) is activated and functions until it is down regulated in response to rising internal plant N levels.

Ammonium transport is also transiently stimulated after reintroduction of NH4 + after a period of low N, but not to the same extent as with NO3 – .

Once NO3 – has been taken up into root epidermal and cortical cells, it can be either reduced, stored in the vacuole, transported to the xylem for long-distance transport to the leaves or effluxed back across the plasma membrane into the apoplast or soil solution. If assimilated in the root, NO3 – is first reduced to NO2 – via NO3 – reductase (NR), then to NH4 + in plastids via nitrite reductase (NiR) and then assimilated into organic N by glutamine synthetase and glutamate synthase.

Nutrient assimilation: Biostimulants can also improve nutrient assimilation (e.g. nitrate, ammonium, phosphate, sulphate) by stimulating the gene expression of enzymes functioning in the plant metabolism or simply as an indirect effect of the increased plant nutrient uptake and transport.

Using a DNA expression microarray approach, Jannin et al. (2012) analyzed over 31,000 genes and discovered that more than 300 genes were differently expressed after 3 days post application of humic biostimulant. After 30 days from humic biostimulant treatment, the number of differently expressed genes was considerably reduced (102 genes in shoots and no differently expressed genes in roots). About 50% of the upregulated genes in shoots were involved in the photosynthetic pathway and in nitrogen metabolism (e.g., nitrate reductase, nitrite reductase and the genes involved in amino acid metabolism). Moreover, 80% of the genes involved in sulphate metabolism (sulphate transporter, ATP sulfurylase and serine acetyltransferase) were also upregulated by humic biostimulant.

Many of these effects can vary depending on soil nutrient levels and availability. For example while  biostimulants can safeguard crops from low nitrogen by improving crop yield and quality they may also protect crops from high nitrogen by reducing nitrate accumulation.

Innovative solutions are needed to ensure that there will be adequate global food security and food supply in the future.