There are a number of strategies whereby biostimulants can help the fertiliser problem.

Our previous article gave some insight to the fertiliser problem we are facing globally and demonstrated significance of the nitrogen cycle. We introduced the value of biostimulants as a way to enable plants to better use the nutrients available to them, therefore allowing producers to use less fertilisers. Read it here. 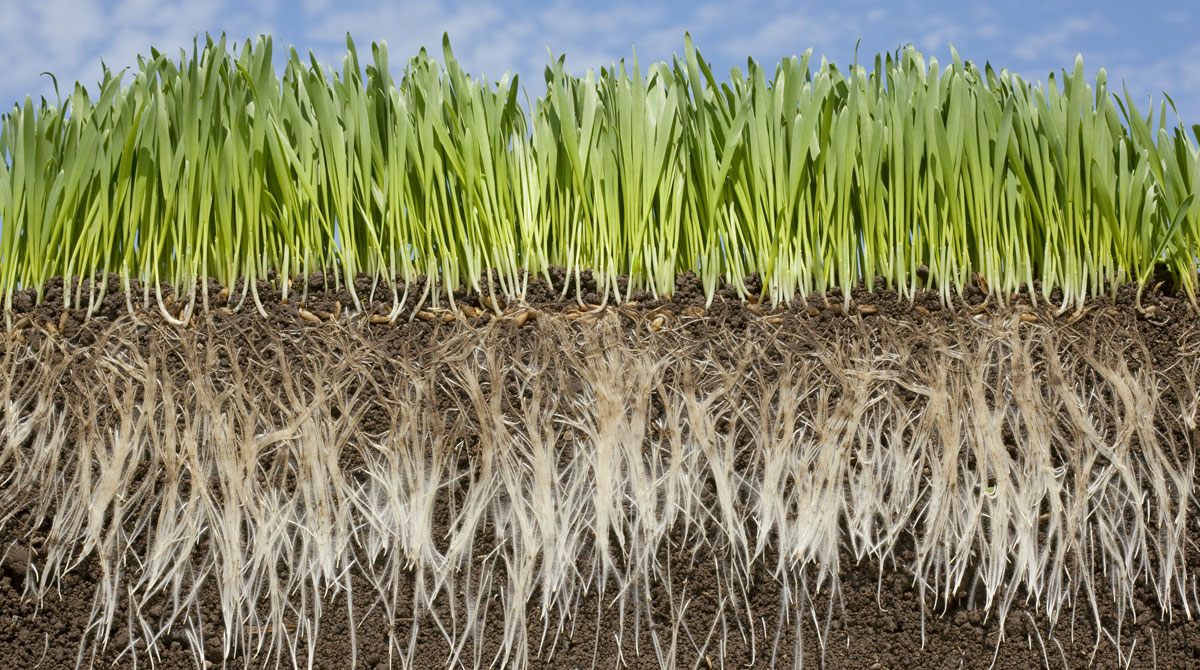 So what are the specific strategies where biostimulants can make a difference?

The following article shares insight specifically on the influence of biostimulants on plant roots.

Plants can respond to the application or availability of biostimulants by changing their root growth. Changes in root architecture and surface area can enable plants to explore a larger volume of soil and capture nutrients more effectively. Consequently, soil containing a lower level of nutrient can deliver the same amount of nutrient to the crop if the plant roots are growing through and accessing a larger soil volume.

Imagine being able to have 20% more crop for the same amount, or less, of fertiliser.

Root morphology: It is known that root morphology is important for acquiring nutrients with low mobility in the soil (Nye & Tinker 1977). However, for more mobile nutrients, e.g. NO3 – and NH4 +, root morphology is often considered of lesser importance. Forde and Lea (2007) reported a significant effect of the amino acid glutamate, even at very low concentrations, in changing root architecture by inhibiting primary root growth and increasing root branching near the root apex. The increase in root branching induced by glutamate application can enhance the density of the root system improving the plant’s ability to explore the soil volume and to uptake nutrients and water.

Biostimulant effects of protein hydrolysates (which contain amino acids) can also result from changes in the microbial community of the rhizosphere. For example, Luziatelli et al. (2016) in a lettuce trial reported that the application of a plant derived- protein hydrolysates increased the population of bacterial species producing the auxin, 3-indoleacetic acid, and other auxin-like compounds. Changes in plant growth are often due to the presence of bioactive peptides inducing hormone-like activities e.g. auxin, gibberellins, and brassinosteroids, which involve complex interactions among phytohormones (Colla et al., 2015; Kim et al., 2019).

Root to shoot ratio: One way for a plant to access more nutrients is to develop a larger root system. However, this strategy comes at a cost. Larger root systems may divert more carbon away from the shoots, limiting photosynthesis and a crop’s capacity to fix and store carbon in the harvested yield. Some studies indicate that the relationship between root size and yield at low N is not clear and may be negative (Gallais & Coque 2005), so developing larger roots may be a sub-optimal strategy for some crop plants. With high levels of nutrition, root to shoot ratios are generally lower   and under these conditions, parameters such as pH and temperature may be more important for N uptake than root morphology. The root to shoot ratio also changes as the plant develops, with the general trend (at least with herbaceous plants) being towards a relatively smaller root system as the plant ages, independent of nutrient level.

The image below shows the effects of Maxstim’s complex biostimulants on rye grass root – untreated vs treated. 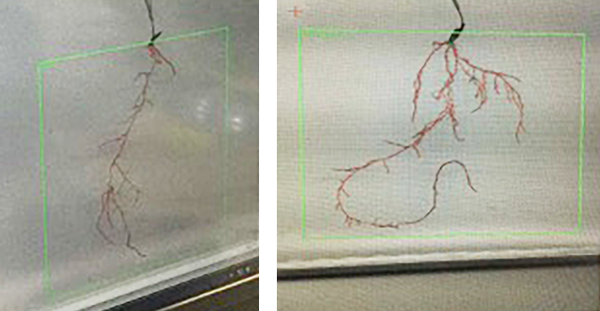 Root vigour: Simply having a larger root to shoot ratio over the plant’s lifespan may not always be useful for increasing Nitrogen usage efficiency in some agricultural situations but the ability to develop a large root system early would seem to be of some benefit in certain conditions. Liao et al. (2004, 2006) found that, in sandy soils with high leaching potential, the ability of plants to rapidly explore soil and capture available NO3 – was important for optimising nitrogen uptake from the soil. These plants did not have a higher root to shoot ratio at final harvest, but their root development was more rapid than in less vigorously rooted plants.

Root proliferation in response to Nitrogen: While root growth relative to shoot growth is generally reduced when soil N levels are high, it is known that roots will proliferate in response to localized patches of high N (Drew et al., 1973; Drew, 1975; Drew & Saker, 1975; Laine et al., 1995). This would appear to be an evolutionary adaptation so that root allocation is not wasted in areas of the soil containing little N.

Deep roots v shallow roots: Deeper roots clearly have the potential to access more water and nutrient than shallow roots but root length densities are generally lower deeper in the soil profile (Barraclough 1986; Wiesler & Horst 1993, 1994). In porous soils where surface applied N is rapidly distributed deep within the soil horizon, plants which can develop a greater root mass further down the length of the root system would have an advantage in enhancing N uptake and reducing N leaching losses from the soil.

Root hairs: Root hairs can contribute 70–80% of the total root surface area and therefore play a critical role in nutrient uptake.  These structures are important in increasing the surface area of roots through a larger effective root diameter with a relatively low investment in dry matter and allocated Carbon. It has been demonstrated that root hair number and density increase in response to nutrient stress. Exogenous application of amino acid has also been shown to have an effect on root morphology. Specifically, L-glutamate application to the root, inhibited primary-root growth and stimulated root branching (Walch-Lui et al., 2006). It also stimulated root-hair development close to the root tip (Walch-Lui et al., 2006). This effect was specific to L-glutamate, and did not occur in response to applications of 21 other amino acids, including D-glutamate.

Look out for our future posts part 3-6 on the Fertiliser Problem to follow in the coming weeks. If you want to make sure you get to read our insight first do sign up here.

Innovative solutions are needed to ensure that there will be adequate global food security and food supply in the future.