The importance of data in assessing the efficacy of biostimulants

EBIC suggestions on underlying principles to justify a biostimulant claim:
Crop categories and Number of Trials

Six groups of crops have been identified for confirming biostimulant efficacy: 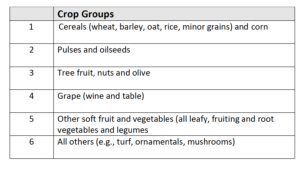 Trials must be conducted by qualified personnel who will record, document, and archive the trial study plan, the results, the final report and all the supporting raw data.

Data from GEP/GLP-certified facilities can be considered credible, even if they belong to the manufacturer. Nonetheless, it is desirable that manufacturers can demonstrate that at least some of the research was conducted with impartial and competent third parties.

As much as possible, trials to support product claims should be conducted with an independent and competent partner, such as one of the following:

The relevant conditions of the plot and crop should be adequately described, for example:

Design and lay-out of trials

The control data set can be from a completely untreated plot or an “omission” plot i.e., the treatment regimen is the same with the exception of the biostimulant, which is absent from the “omission” plot.

Where possible, control groups selected for an improved nutrient uptake claim should include:

1. The support formulation alone, if the support provides nutrient elements;

2. The biostimulant formulation alone (without the nutrient elements).

There should be some attempt to characterize the applied stress level.

Information should be provided on the formulation, application method, concentration and amounts of the test product as well as climatic and soil data.

The information provided should be sufficient to establish that good agricultural practice is being followed, for example:

The trial report should include:

Why are biostimulants vital for agriculture?

How can biostimulants help against rising fertiliser costs?

Richard Salvage, CEO and Dr Colin Fleming, CSO discuss how the use of biostimulants can help farmers reduce their fertiliser usage and save costs.